“Architect Chetwood Associates has applied for planning for a £2.5 million “wind dam” in Russia.

The dam, which would be located over a gorge at Lake Lagoda in north-west Russia, includes a cup-shaped spinnaker sail, believed to be the first of its kind, which will generate renewable energy by funnelling the wind through an attached turbine. The spinnaker shape is similar to the mainsail of a yacht, and is thought to be particularly effective in capturing wind.

Project architect Laurie Chetwood, said that the shape of the sail was influenced by functionality and a desire to produce something “sculptural”.

He added: “The sail looks like a bird dipping its beak into the water, which will be much less of a blot on this beautiful and unblemished landscape.” 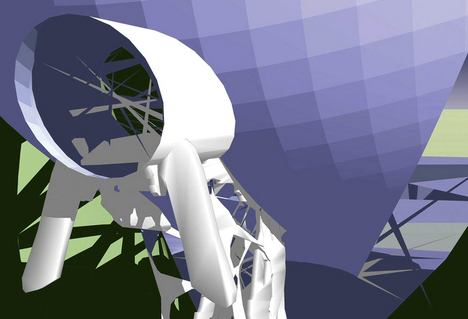 “But it is also highly effective at capturing the wind because it replicates the work of a dam and doesn’t let the wind escape in the way it does using traditional propellers.”

If granted planning, the dam will be 25m high and boast a 75m span when it goes on site next year. The practice is also looking at applying for planning permission for a similar scheme at another gorge, further up the valley.